In college football there is a fixed amount of time that a student athlete is allowed to spend participating in their sport. In 2006 when IDS was given the criteria to create a new football operations center for Michigan State University, it included a mandate to design the space for maximum face-time between the players and the coaching staff. The facility that housed the football program was hidden in an outdated building behind overgrown landscaping which was also highly symbolic of the team’s record at the time!

The primary goal of the of the Skandalaris Football Center project was to revitalize the MSU Football brand with an identifiable exterior and a facility that fully supported the team and coaching staff. The complex had to elevate the University’s ability to attract top-notch coaches and student athletes. President Simon’s campus-wide initiative, Boldness by Design‚ was a driving force as well. The result was the transformation of a sleepy one-story building into an open and exciting two-story facility that made a clear statement: We’re here to compete and win!

The center was completed in December 2008 with meeting rooms packed with smart technology, coaches facilities designed to recruit the best, and with a 28,000-square-foot two-story glass atrium addition, The Hall of History now celebrates the program’s storied past.

This was the first MSU football project ever for IDS. Athletic Director Gregg Ianni had worked with the team in the 80s and 90s and believed that IDS had successfully reinvigorated the MSU Basketball program with their work on the Breslin Center and the Berkowitz Complex addition. He was willing to give them the same assignment with the football program.

Stachowiak: When we first started, the MSU football facilities were probably the worst in the Big Ten and this made it difficult for them to recruit great athletes and to maintain a good coaching staff. They were known as a great basketball school and they wanted to send a message that they were serious contenders in Big Ten college football as well.

Battle: MSU was a powerhouse back in the 1960s and they hadn’t really done anything to their facilities since then. Plus at that time team facilities were not a big deal.

Stachowiak: They had just fired their coach and wanted to use the Skandalaris Center as a tool to attract the best new coach they could get. Mark Dantonio was recruited from the University of Cincinnati and hired during the schematic design phase of the project. He supported our design to the point that he was willing to wait for the final result.

Battle: The coach and his staff were set up in temporary trailers for his first year on campus!

Stachowiak: The project involved demolishing the existing coaching offices and some of the meeting rooms to get the footprint we needed. The concept for the new operations center started with a large meeting space in the center that would house the entire team.

Battle: The major donor, Bob Skandalaris MSU alum but not an athlete, wanted to see the program brought back to the glory days of the 1960s. To support his mission, we used a combination of exterior materials. Contemporary glass and steel were implemented as part of the front atrium space to represent strength and power. And more traditional brick and limestone lined the exterior to honor the University’s academic values.

Stachowiak: To address the issue of maximizing the time between players and coaching staff, we created a vertically dropping operable partition with an acoustical separation. As the coaches conduct meetings, clocks in the back of the room tell them how much time they have to deliver their message and with a push of a button the partitions come down dividing the room into offense and defense. From there another time clock tells the coaches when to break into specific player-position meeting rooms.

Barden: Technology was incorporated wherever we could. Anything a coach said was recorded so if a player missed the meeting he would have digital access to the message. The coaches offices were directly above the meeting rooms and the head coach had multiple live video feeds so he could cut into any training session and interact with the team.

Stachowiak: George Perles, former coach and trustee, was a major donor to the outdoor plaza. He wanted roses planted there symbolizing the single goal for the team: to get to The Rose Bowl!

Barden: This Hall of History area was intended to celebrate the past, including student athletes and donors. Lighting was a key component in creating energy in the different spaces; graphic and trophy exhibits needed museum-quality lighting, the video monitors required a more diffused contrasted lighting, and the space celebrating the players required a more inspirational lighting scheme. Sophisticated audio controls and speakers use sound as a way to create excitement and energy.

Battle: Sustainable materials and construction practices are all sustainable concepts inherent in the design of the center.

Barden: The entire lighting system, from the daylight control of the fixtures to the lamps used, is state-of-the-art resulting in energy savings.

Stachowiak: In the glass atrium area a heat recovery system is used to capture the heat that naturally rises to the top of the building.

Battle: The center really did totally transform the MSU Football program from one of the worst in the Big Ten to one of the best!

Barden: The facility was designed to be an active space. If you walk by today, you recognize it immediately.

Stachowiak: It was a great experience to see that we could apply all that we had learned from our MSU basketball projects and apply it to the football program and with great results! 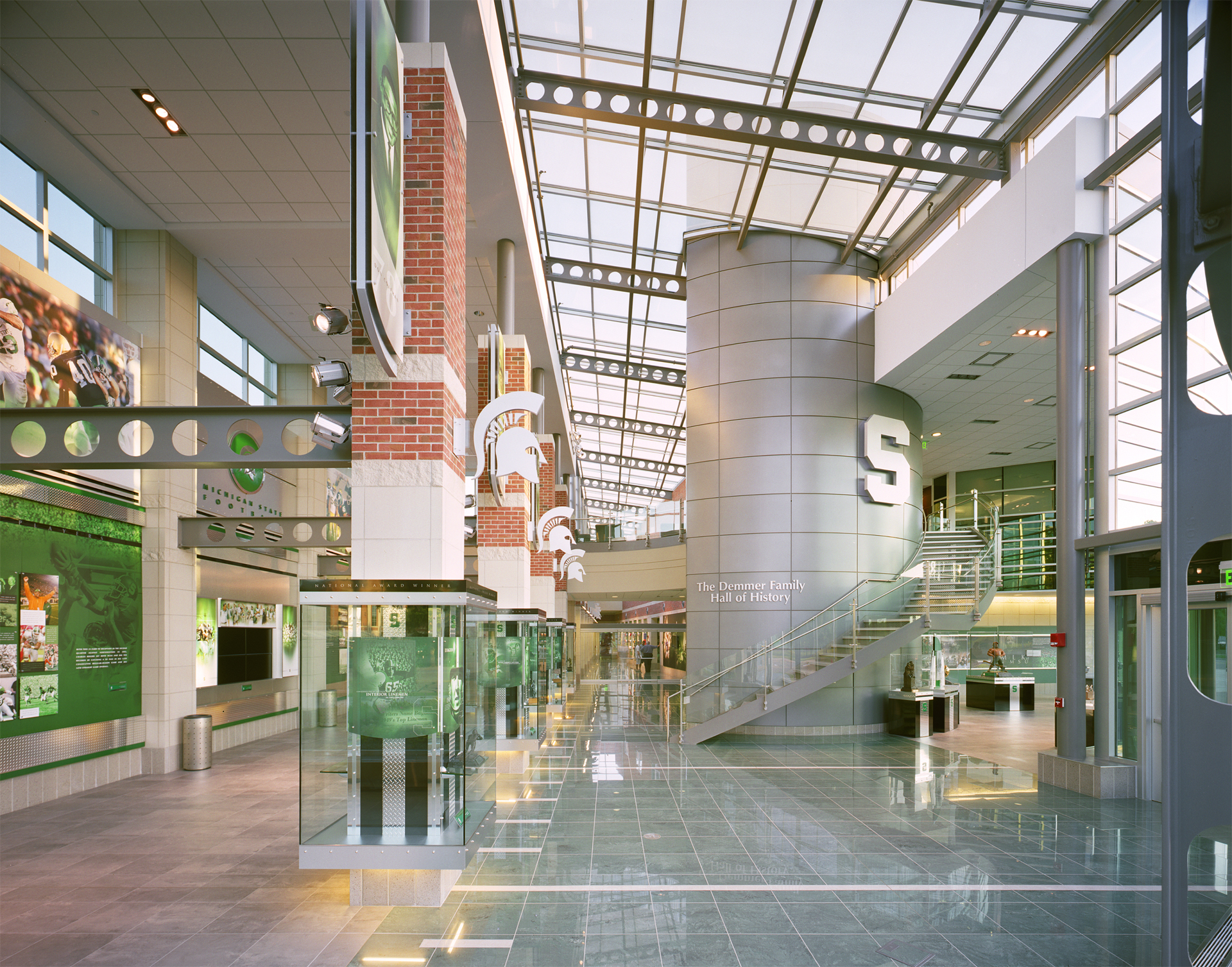 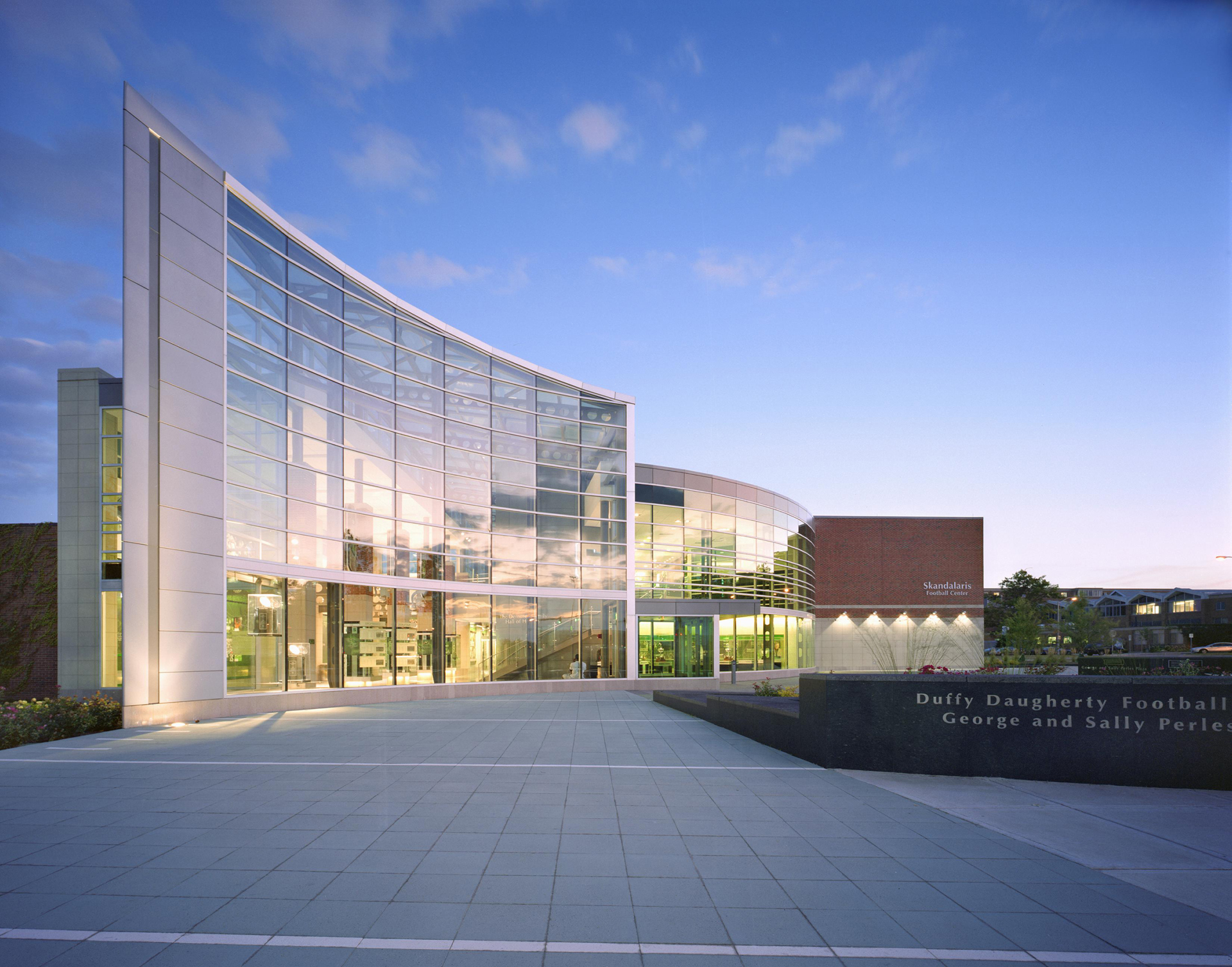 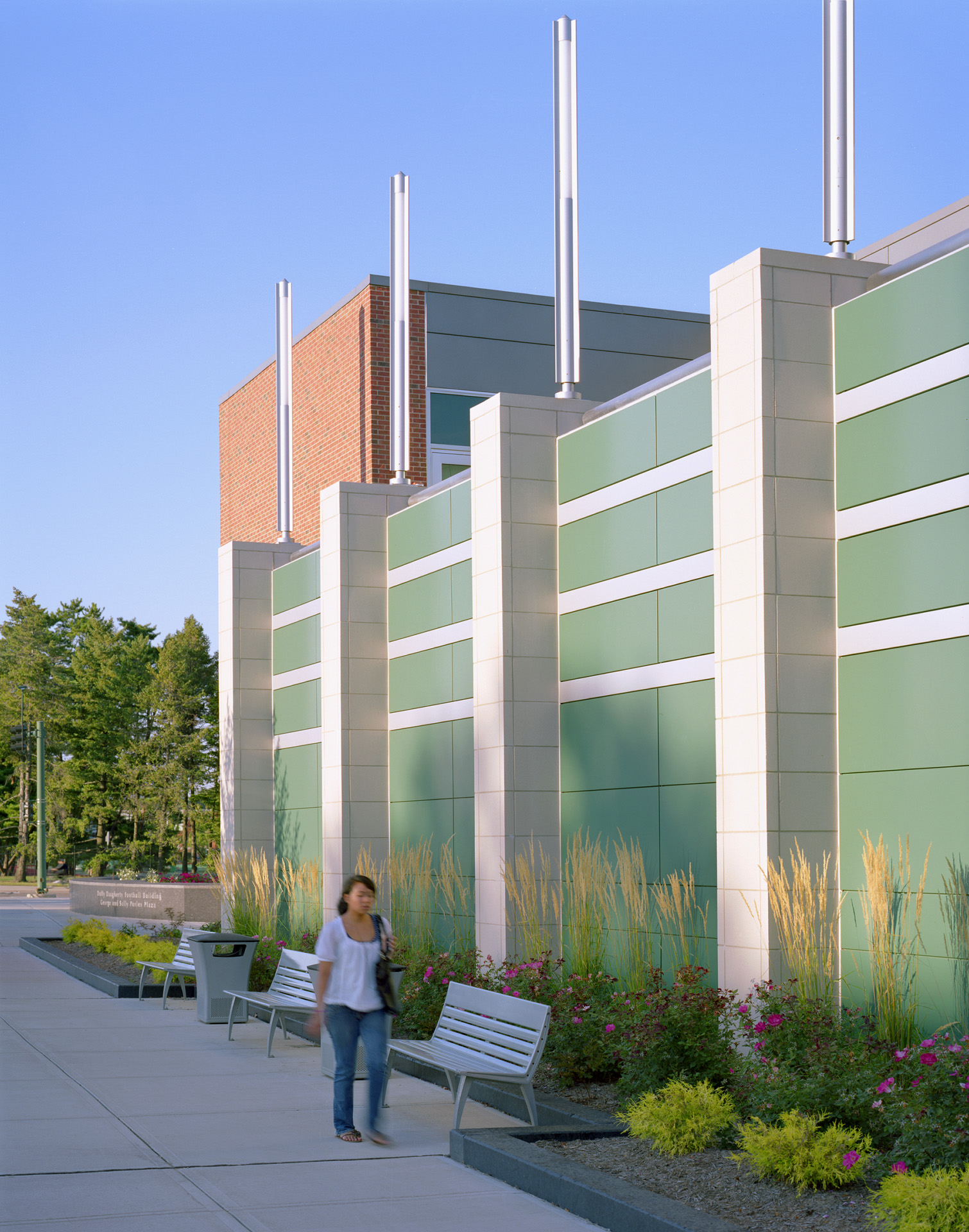 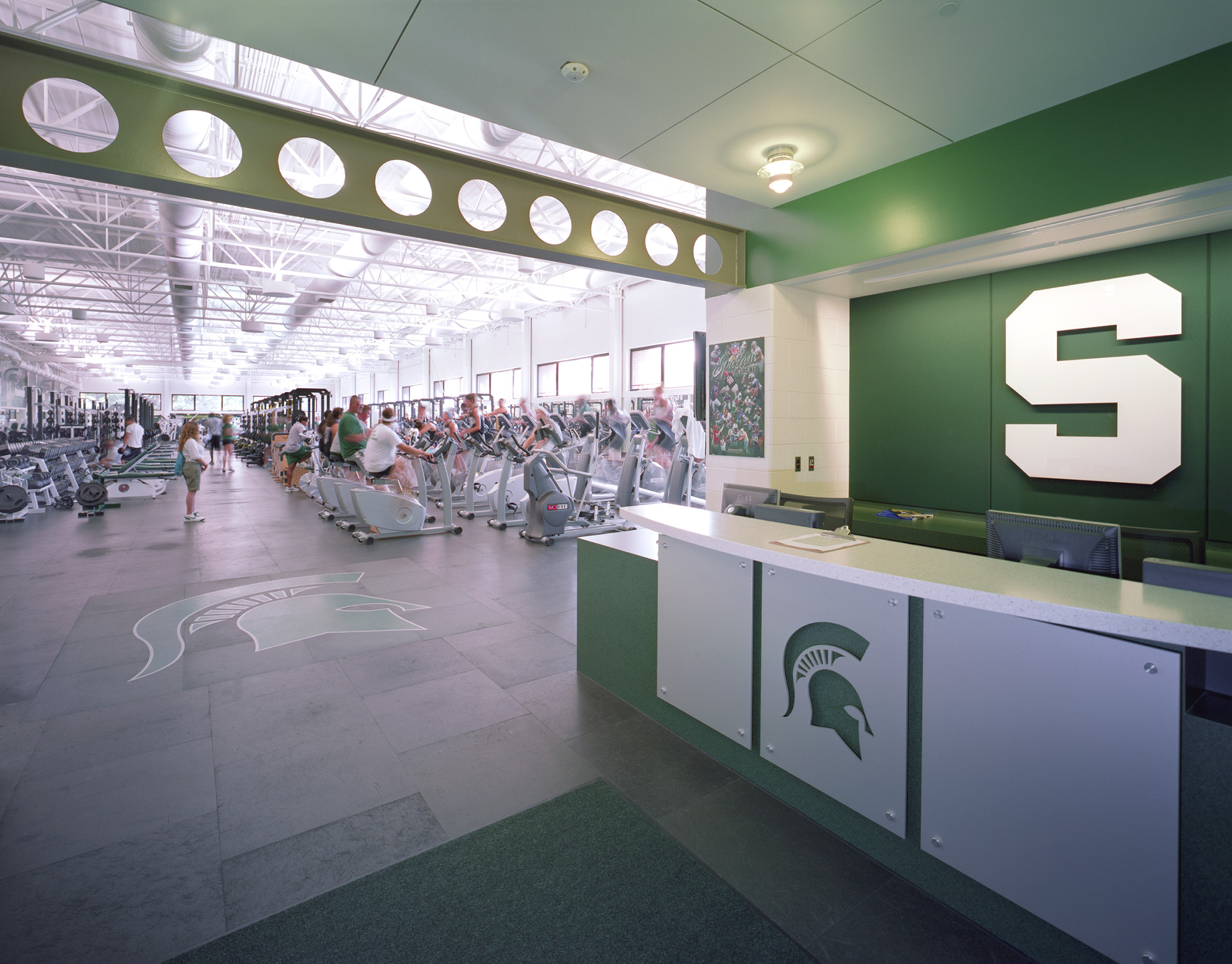 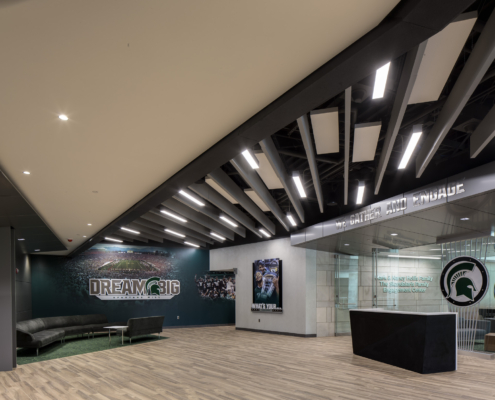