Architects, engineers and project managers know that challenges are an inherent part of their profession, and they are tasked with finding feasible solutions on every job.  With more than 3,000 projects in their portfolio, the IDS team officially assigned “most difficult” to the Wells Hall addition at Michigan State University.  The good news is that the resulting structure features a prominent 88,000-square-foot addition and a full infrastructure renovation to one of the busiest buildings on campus. Completed in August 2012, Wells Hall is home to the College of Arts & Letters while still housing the four largest and busiest lecture halls at MSU. The addition also features the first-ever Starbucks located in a college campus building!

This project began when the Language Department needed to find a home to consolidate all of the disparate faculty offices around campus. In addition, the University wanted to showcase their commitment to global and international studies. Wells Hall became the logical choice, as it provided a central location with enough space for growth, and the existing structure was in great need of-and slated for-renovation as part of the Morrill Hall Replacement Project.

The Vice President of Facilities had characterized the Wells Hall complex as a game of Chinese Pick-up Sticks and wanted to bring some order to the complex.  The design solution was to rotate the three-story addition by 31 degrees, floating it on top of B building, to provide a clean 90-degree angle to the C wing.  “Logistically everything about this project was about as difficult as anything we’ve ever done,” IDS Principal-in-Charge Paul Stachowiak explained. “We had to fit the new addition on top of the existing building, manage the impact of this on the mechanical and electrical systems, on a full-blown construction site where students were still attending class in the four lecture halls below!” While the center of the complex rose in height, a new 21st century face for the Language Department was the result of an addition in a different direction—a new one-story building creating a connection between Red Cedar Road and the People’s Park.

Overall success was achieved by managing very tight site constraints, keeping the adjacent A and C wings fully operational while lecture halls were filled with students every day from 8am until 11pm.  The two-year, phased construction period required keen and focused communication and cooperation amongst all involved: IDS, Barton Mallow and the University. “We had a really great team for this project,” IDS Construction Administrator Tracie Withrow recalls.  “There was a certain chemistry that you don’t always find…there was no finger-pointing.” The complicated project was completed on-time and within budget.

Today Wells Hall has a blend of private and open office environments, and a clear east-west corridor throughout the complex. The ceilings are signature green providing an additional way- finding feature. One of the prominent areas is a three-story atrium with space for student interaction and informal presentations. Students and faculty are encouraged to collaborate in break-out spaces throughout each floor.  Solar-controlled sun shades ensure that a visual and physical connection to People’s Park—a historically significant space for the University, is evident on every floor.  The new coffee shop is located with a southern exposure visible to a busy pedestrian walkway and is a hub of social activity.

The first big mechanical challenge was to tie together three adjacent buildings in order to provide chilled water during the first phase of construction. “The basic reasoning was to serve the whole complex with one chiller plant to save on maintenance and operational costs,” IDS mechanical engineer Ron Cyrowski explained.  “So in the end, we were able to create a regional chiller plant for the whole complex.”  The original cooling towers would eventually be placed on top of the new three-story addition.

Another challenge came in threading eight new support columns through the existing building. Holes were cut in the roof and seats were removed from the lecture halls to allow for installation of more than 100 micropiles.  Three of the columns came down through a mechanical room on the lower level. The new three-story structure was placed over the existing lecture halls supported by these structural columns and cantilevers out in four directions.

The building was designed to MSU’s standard of achieving a rating of 30% better than ASRAE. Sustainability factors included the placement of a second green roof on the new one-story addition. Low-growing plants absorb heat and rain water, resulting in less drainage into the storm system and eliminating significant impact on the ecosystem.

Fan wall technology was a unique design concept employed on this project as an additional way to save energy and costs.  Instead of one large fan, there are 12 fans inside each air handling unit. “It’s a fairly new concept and we spent a lot of time discussing this cutting-edge technology with MSU,” said Cyrowski.  “During light load conditions, individual fans can be shut off and operate as low as 3% energy usage, whereas with the standard one-large-fan system, you can only reduce the operation to 30%.”

The new space had less overall square footage which created an adjustment for the staff as they moved into their new workspace. The solution was to give faculty private offices on the brick-face side of the building overlooking Red Cedar Road toward the stadium.  Grad students who may have come from a large enclosed office elsewhere on campus moved to open office bullpens but were compensated with one of the most beautiful views on campus overlooking People’s Park.

Today, Wells Hall is a hub of student and faculty activity, as well as the recognizable face of the University Language Department. Even students who do not have classes in Wells Hall can be found hanging out in the atrium enjoying a picturesque view.  All of the project challenges have been well worth the hard work! 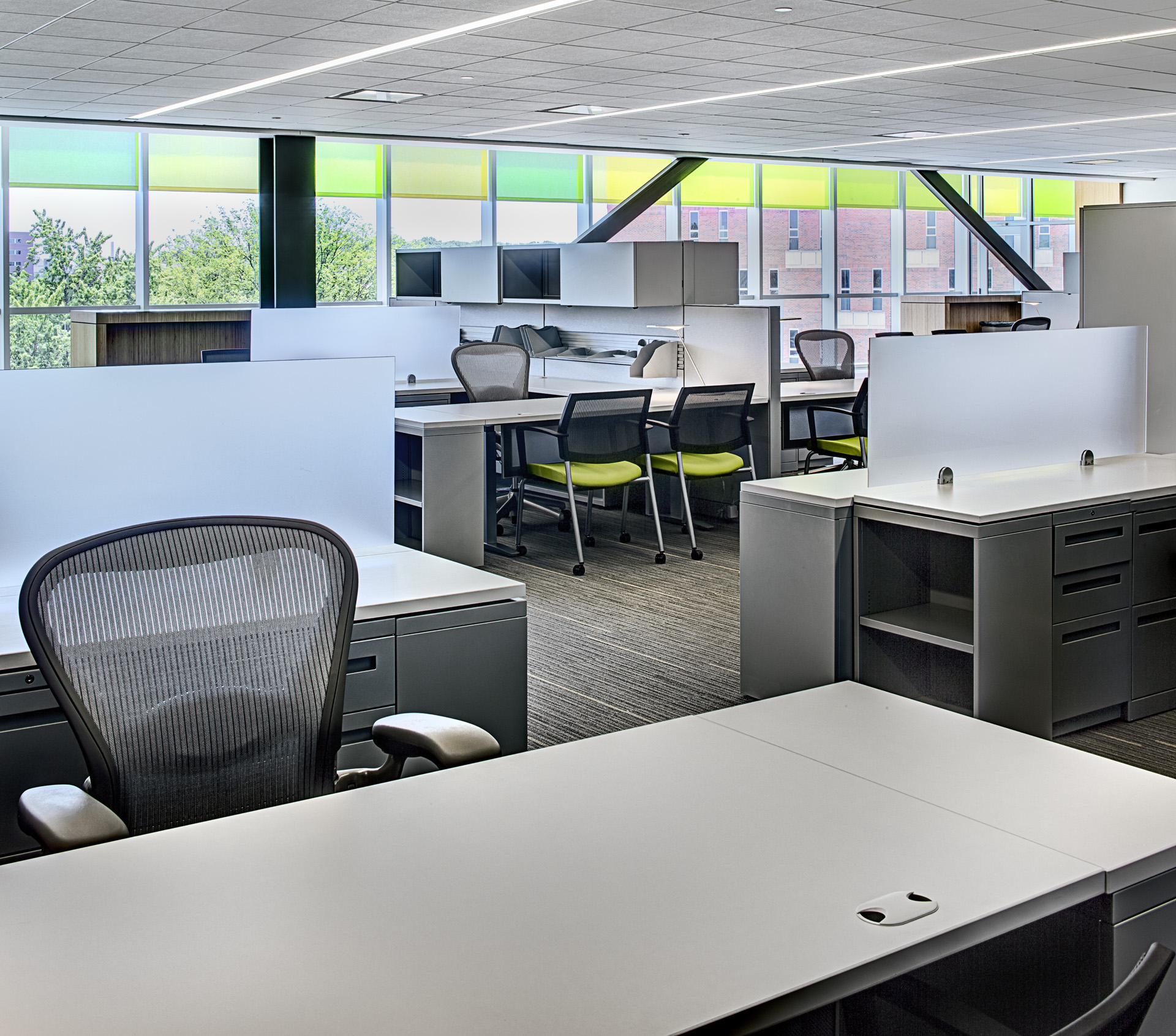 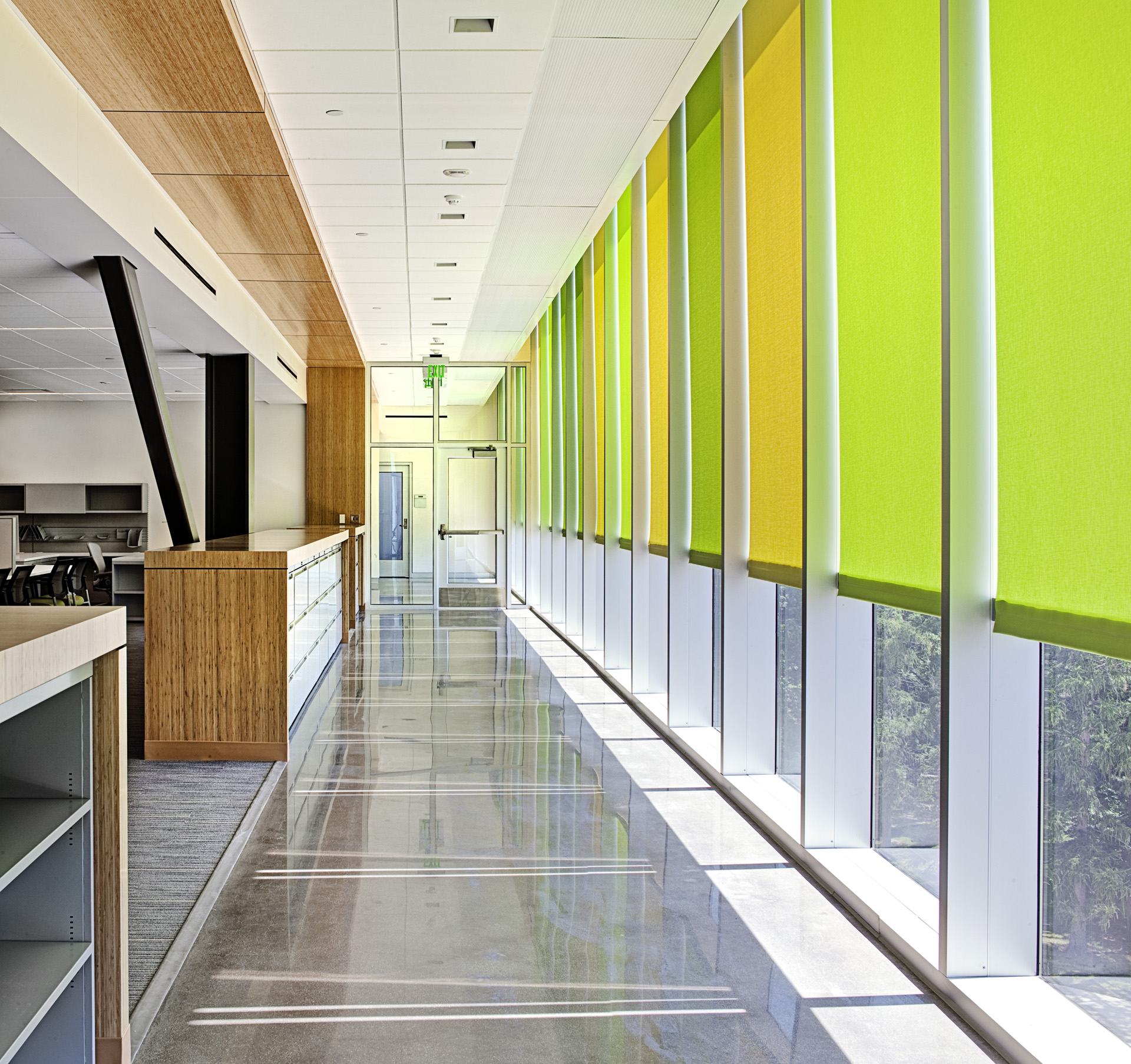 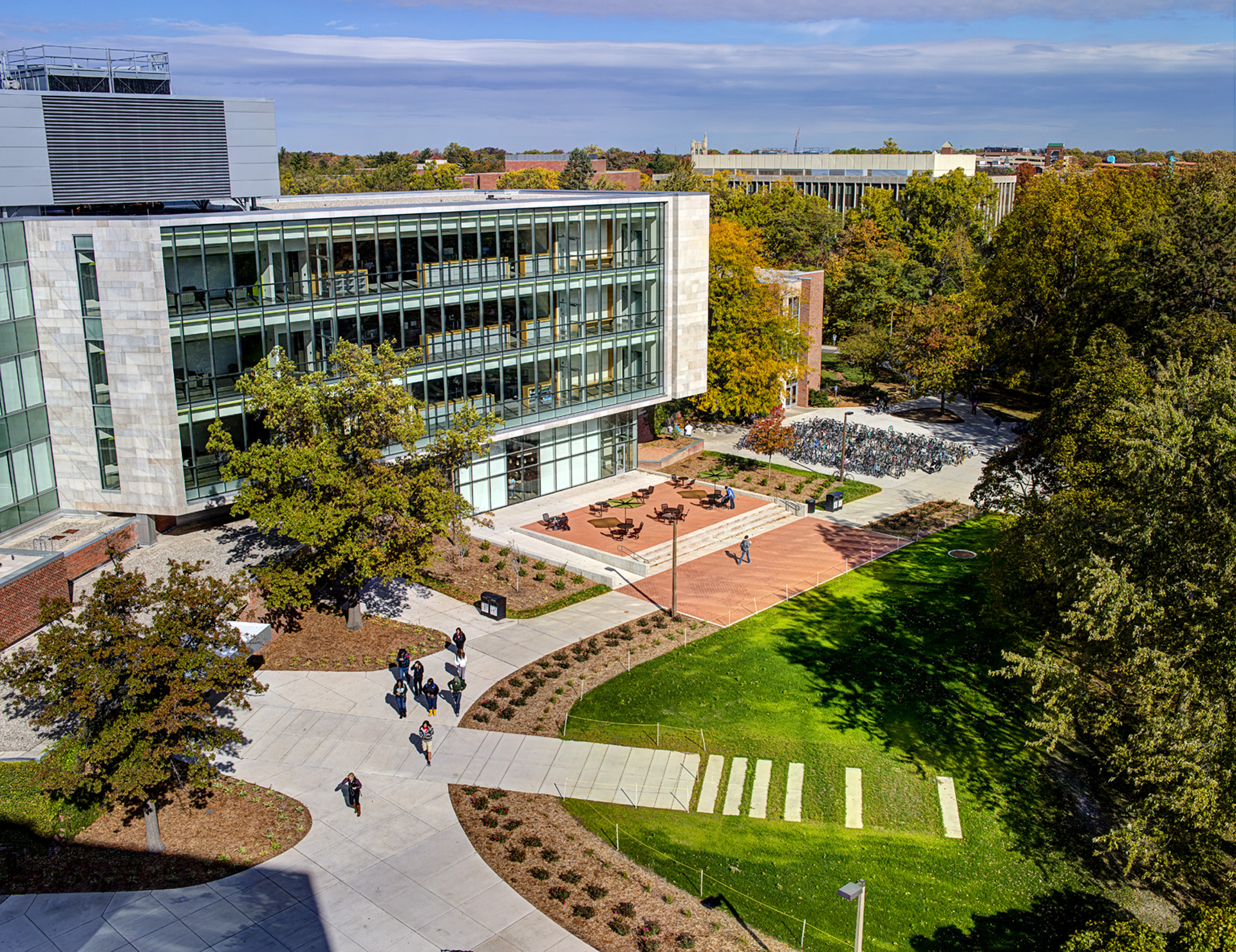