Six years after IDS finished the Michigan State University Skandalaris Football Center, they were awarded a competitive bid to design and construct the Spartan Stadium North End Zone Addition the next phase in a comprehensive plan to fully upgrade the University football program. This project includes a two-level expansion that houses everything needed to fully modernize both team and public space, including locker rooms and a campus-wide media center. Key to the future of all athletic departments on campus is a new stadium-based Recruitment Center that is available to any NCAA team. The project also includes new homeland security compliant entry plazas, additional restroom facilities and concession stands.

The north end zone becomes the new gateway for MSU’s football team on game day, day when every minute of an athlete’s day is fully scripted. The project had a fairly aggressive timeline and to properly prepare, the IDS team shadowed the team on game day. At the end of 2012, we started the design process by walking into the stadium with the team during the last game of the season, IDS Principal-in-Charge Paul Stachowiak recalls. We marched from Kellogg Center into the stadium so we could see exactly how they were using the space. The locker rooms were dingy and small, almost exactly as they were in the 1930s. There was not enough space for the whole team to stretch at the same time, and part of their shower space had been converted into coaching offices for the visiting team! The current equipment manager admitted that he has held the unceremonious award for the worst Big Ten facilities for 28 consecutive years!

IDS is known industry-wide for successful collaboration with outside design partners. On this project, the team worked closely during the programming phase with HNTB‚ an architectural firm specializing in sports facilities that had handled the stadium’s West Tower expansion project in 2006. Our work with Tom Izzo’s MSU basketball program had given us meaningful experience for this project, Stachowiak explained. Recruiting 18-year-old athletes is similar for both sports, yet we had never handled a football stadium project and we wanted to be fully equipped to handle the demands. Working with the outside firm helped IDS understand the nuances of the project and helped manage budget constraints‚ while still preserving the wow factor necessary to attract the nation’s leading student athletes.

A focus for all athletic teams on campus is the new recruiting room which is designed to offer comfort and convenience with a catering kitchen and a large angled glass panel offering a picturesque view of the Red Cedar River to remind the student athletes that they are not just part of an athletic program but an integral member of the student body on a beautiful campus as well. The locker rooms for the football team doubled in size and accommodates the needs of today’s athletes. The project is fully designed to LEED standards, including a highly efficient thermal envelope, mechanical systems with heat recovery wheels, and daylight sensors for energy savings.

Technology is a key element in the new media space. On game day, this room functions as a full- television broadcast production facility. The stadium is used only a few days per year for official football games so the University wanted to make this space multi-purpose and available to faculty and students outside the football program. A media control room with state-of-the-art technology offers flexible use of this area. Lighting and sound will easily toggle between television broadcast and regular settings depending on the use of the room, IDS Engineer Mike Barden explains. Our biggest challenge for this space is to determine the best way to make sure the coaches from the two teams will not cross paths on game day!

IDS broke ground on this project in June 2013 and established temporary locker room access for the fall 2013 football season. Construction continued throughout the season and opened in fall 2014. In their inaugural season working out of the new North End Zone Addition facilities, the Spartans closed out the season with an 11-2 record, a Cotton Bowl victory and a top 5 ranking in the final FBS Poll! 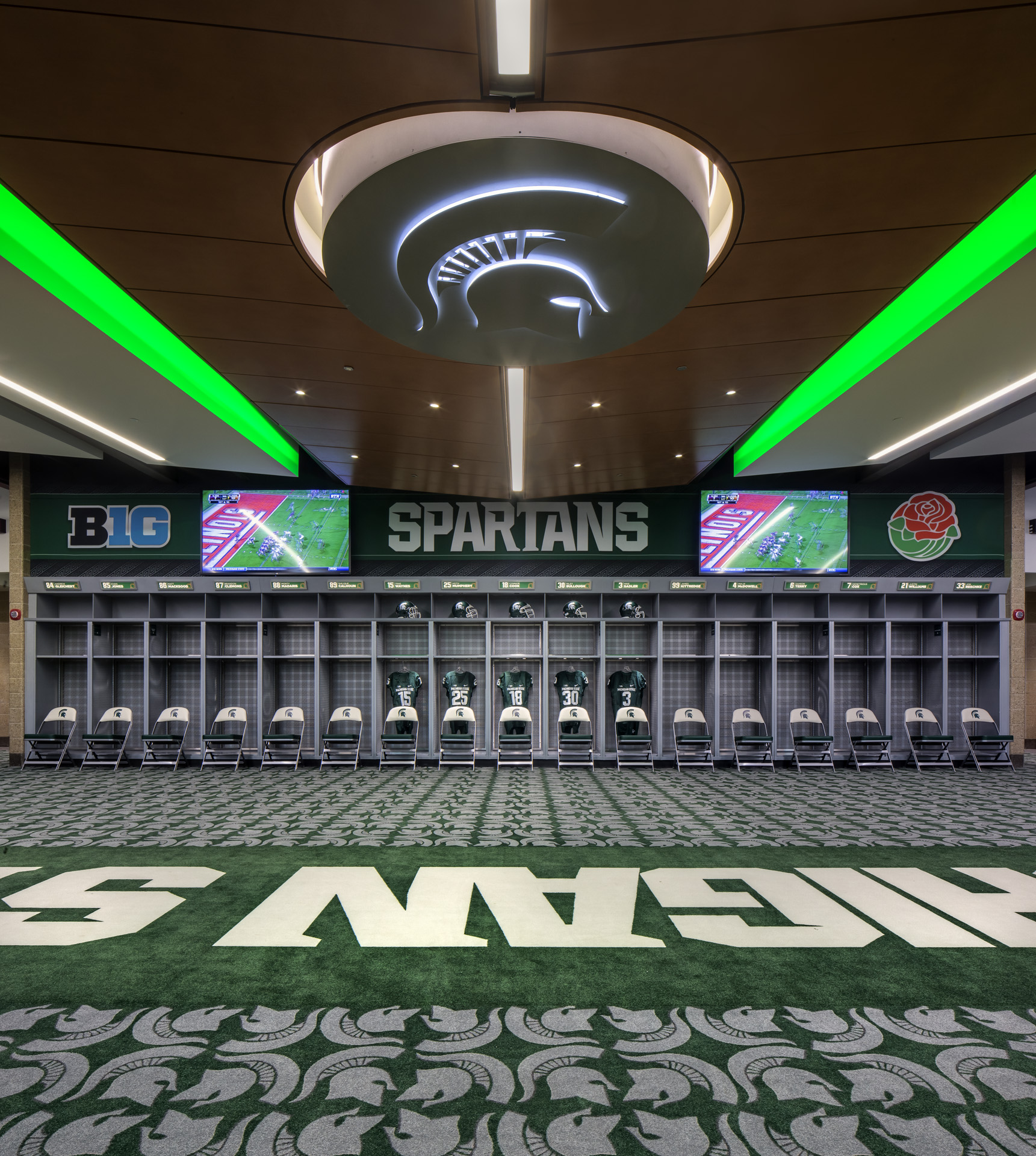 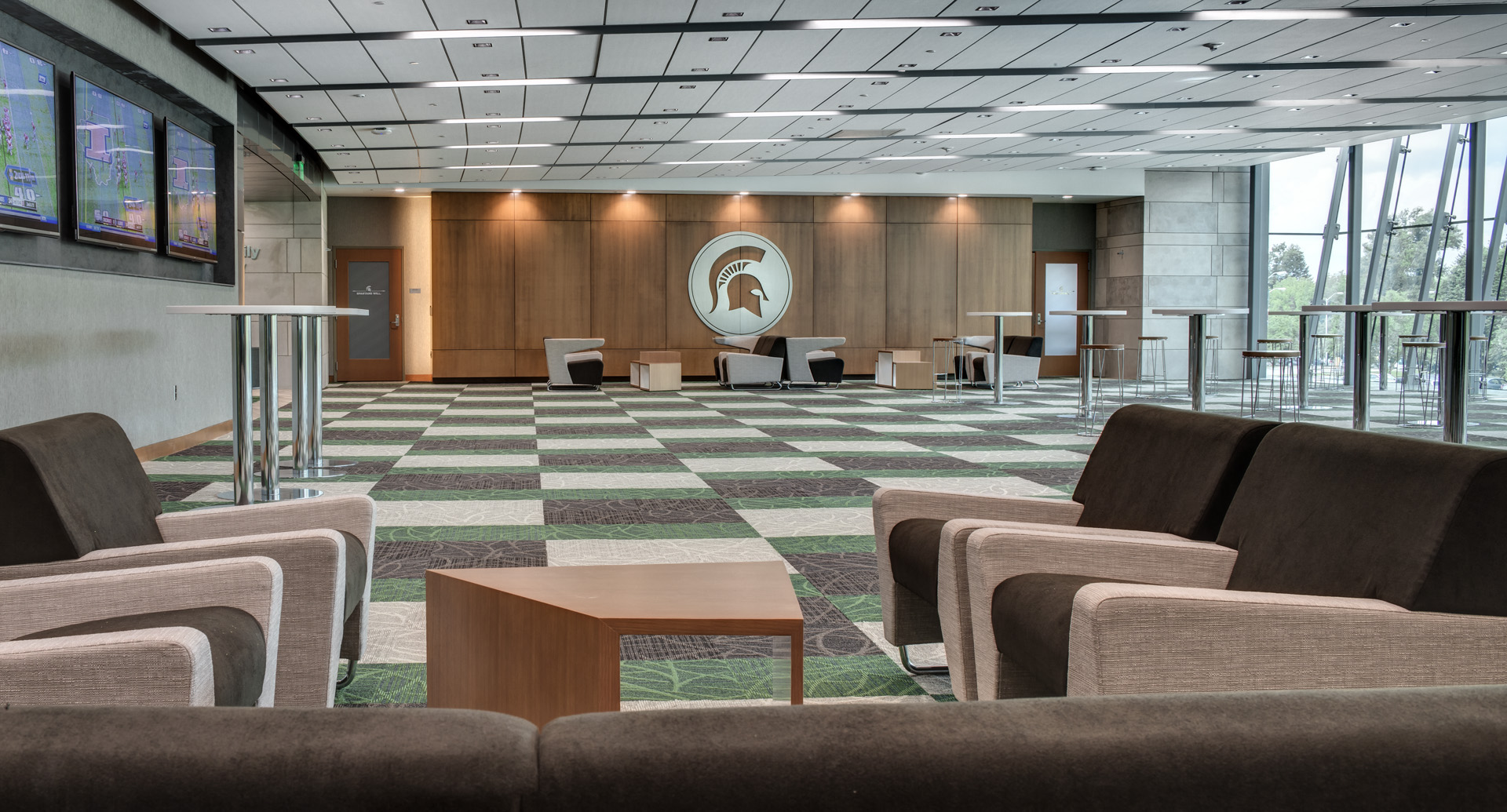