Originally constructed in 2000, the Berkowitz Basketball Facility at MSU was designed to house both men’s and women’s basketball operations. While the building was state-of-the-art at the time, an entire generation of players have come and gone through the facility. Graphics installed only 15 years prior showing Michigan State’s most recent championship, while fresh in the memories of the University, were of little consequence to today’s recruits. Coach Izzo and his staff quickly realized why the recruits had no memory or connection to that championship. Not only were most of them less than a year old when that occurred, their status as the generation that has fully embraced social media meant that if it didn’t happen that week, it wasn’t relevant. The realization at the speed in which recruiting, and recruits, have changed was the catalyst for this renovation.

The newly redesigned office suite is a direct response to the change in today’s recruits. What was previously a more formal space with carpeting and cherry wood throughout has been redesigned with a more tech aesthetic with quartz flooring and white glass panel walls. Instead of reinstalling the matted photos that once lined the halls, glass poster displays allow their staff to quickly change out photos on demand. Photos displayed in the suite now sometimes are changed in one-week intervals. Interrupting the glass wall panels are magnetic panels where staff can peel off large graphics and change from historic displays to recent player achievements. To seed up the opportunity to reflect current day achievements, several flat panel monitors are mounted throughout the corridors that allow staff to change content daily. Recruits coming through the building are now see the highlight play from yesterday’s game that showed up on their social media feed. The use of digital monitors extends into the video viewing room. A total of 9 monitors are installed in three different arrays are connected to multiple media sources creating a multitude of environments outside of daily video review.

The program’s history however hasn’t been ignored. Opposite the new white glass wall panels throughout the corridors is vinyl wall covering showing each of the team’s final four appearances. The tone on tone print acts as a backdrop to several of the glass poster displays creating a layering of current achievements with historic artifact.

Renovations extend to the exterior of the building as well. New canopies were built over the existing patios for both the men’s and women’s side of the facility extending the use of this space in inclement weather. 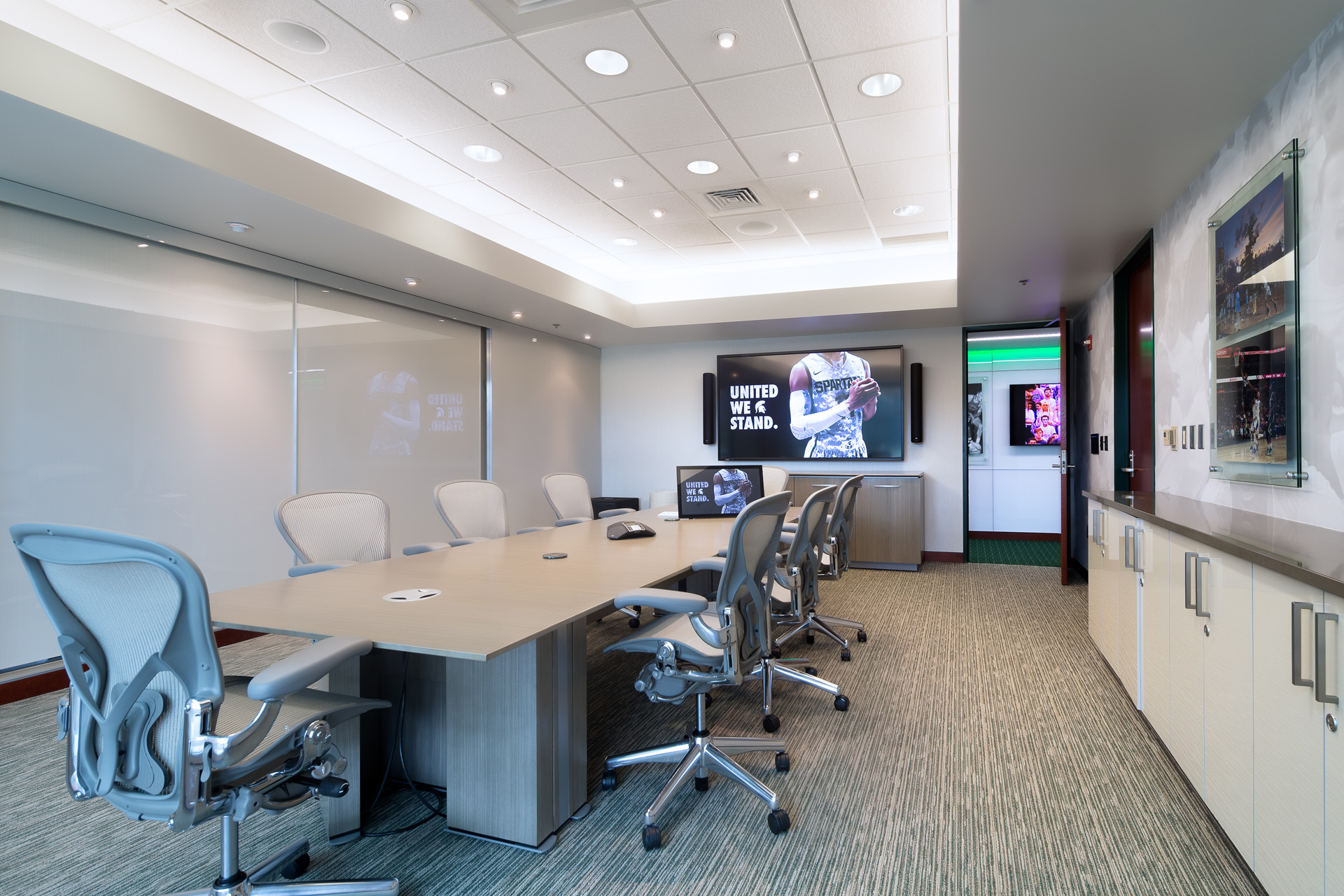 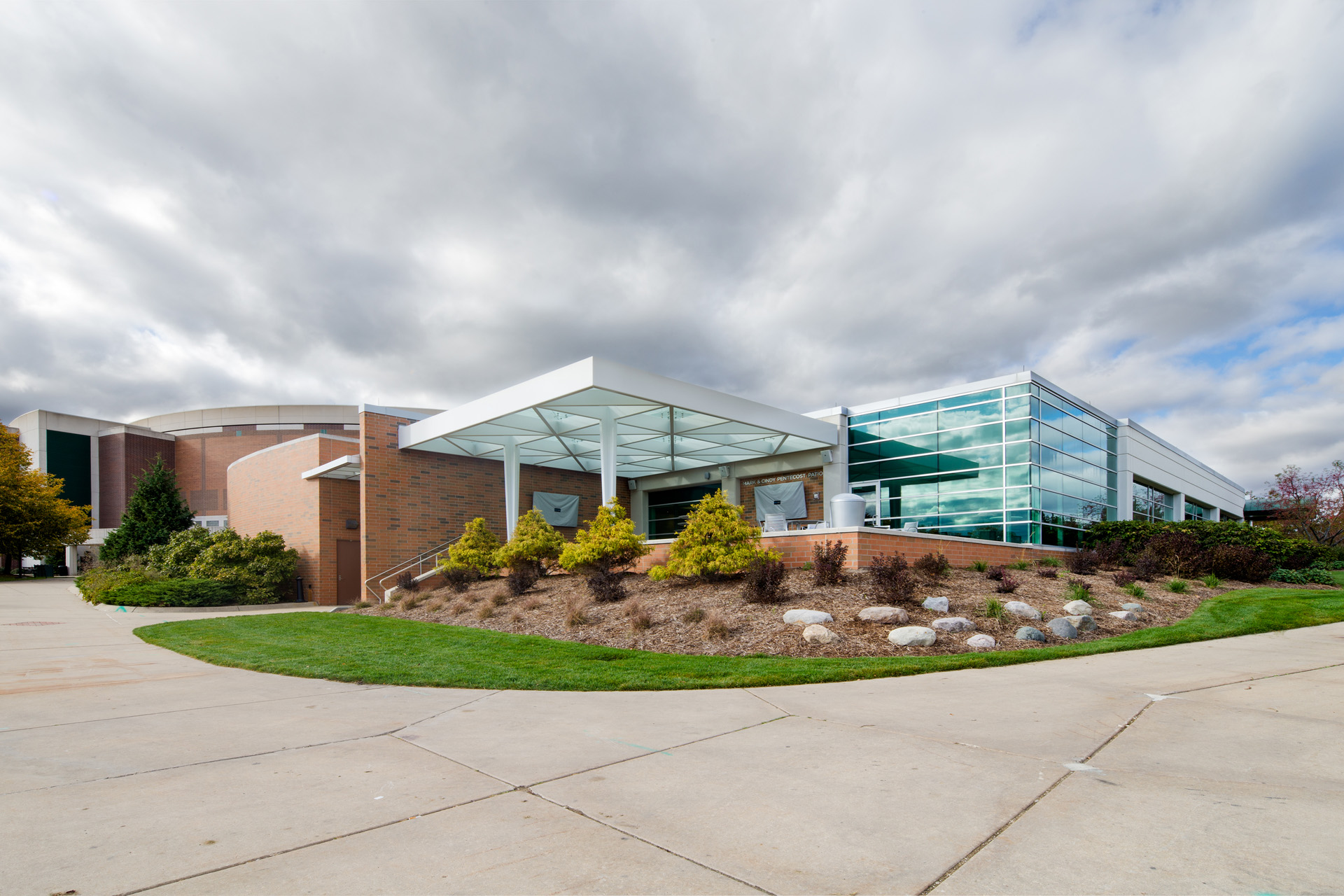 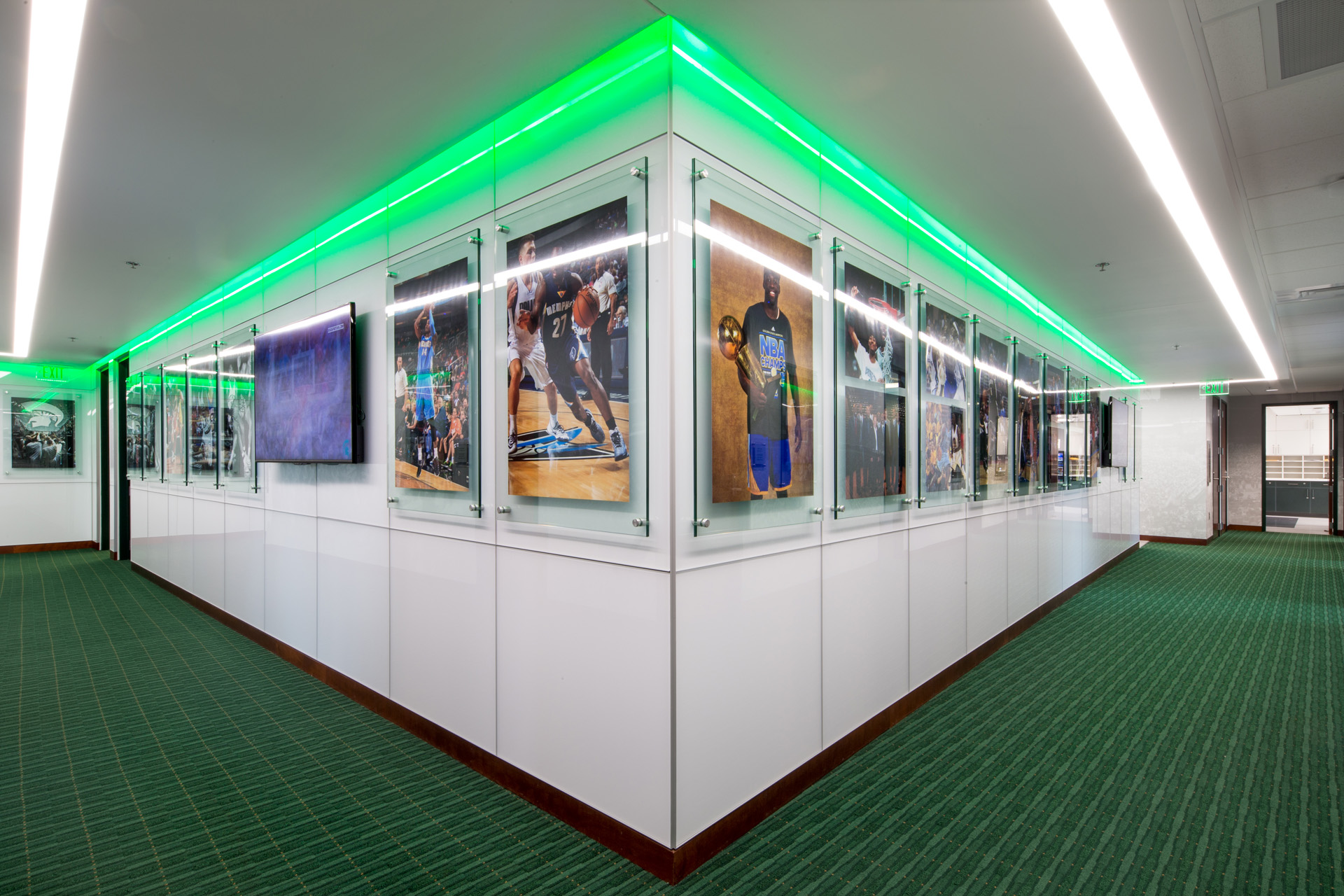 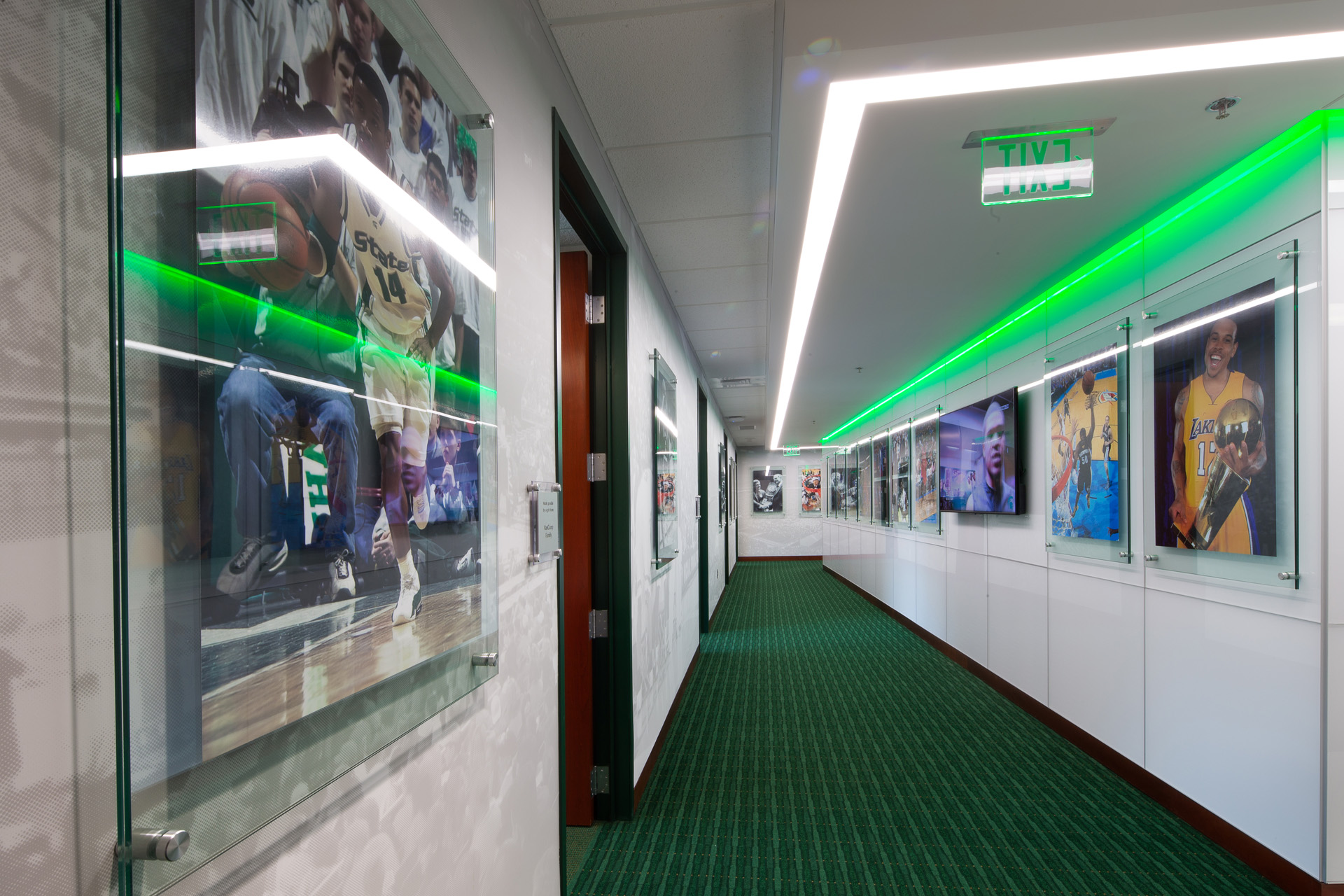 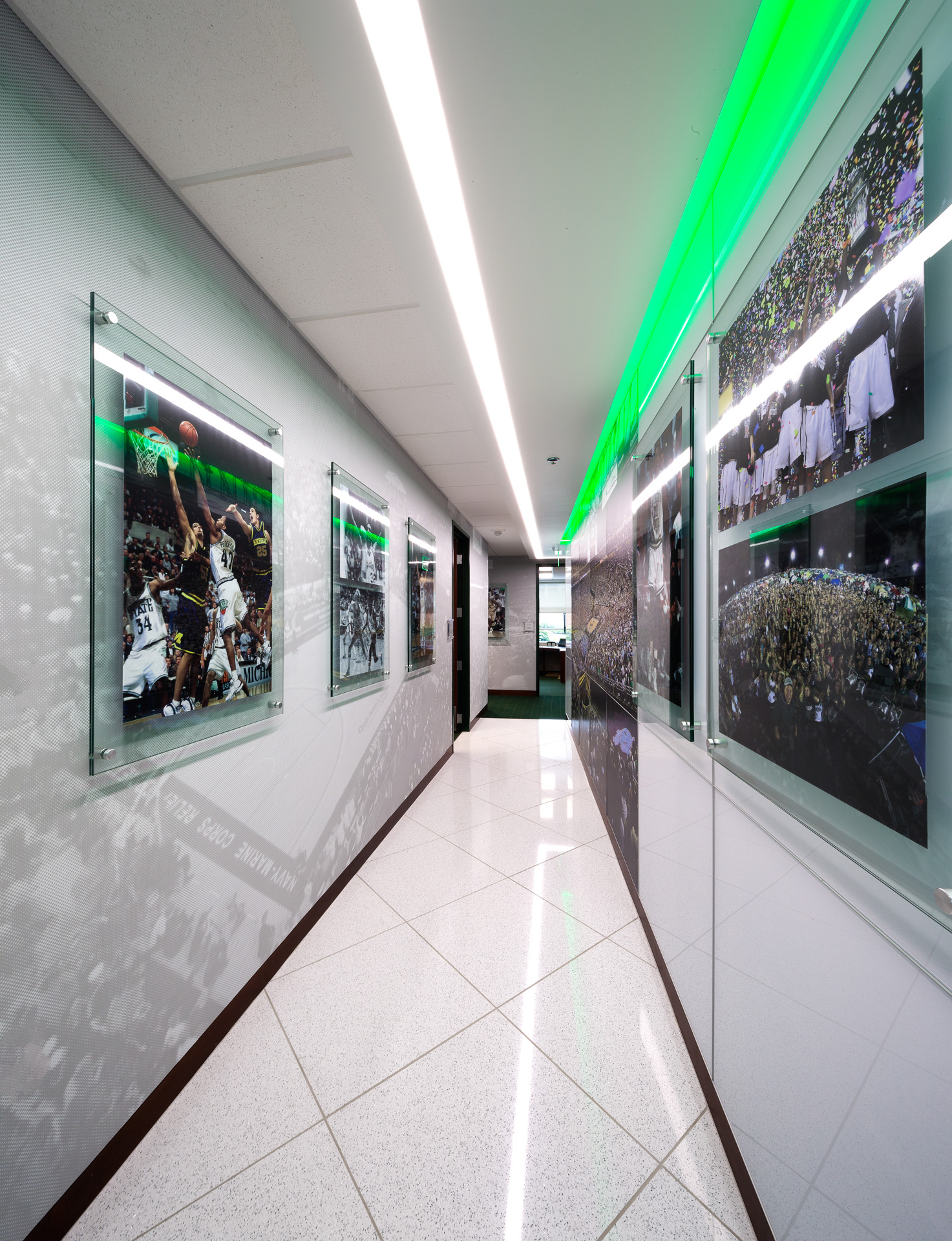