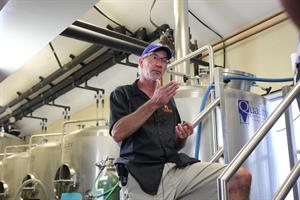 IDS recently completed our first Brewery and Distillation Facility at a College or University. This project was completed at Schoolcraft College, where a new brewing program has been introduced to the College. This program is available to students this fall and pictures of the new facility to come. More on the project scope to come. Read below for information about the program:

The idea and concept of the program was all initiated a few years ago when Weinkauf began seeing breweries and distilleries opening in Michigan. A home brewer of 20 years, he saw job opportunities. Last July, Schoolcraft’s Research and Analytic Department conducted an environmental scan to gather further information on the fields of brewing, wine making and distillation. It was found that between 2014 and 2020, jobs in brewing are expected to increase by 200 percent and distillation is expected to increase by 100 percent.

Master Brewer and the Face of the Liberty Street Brewing Company, Joe Walters, Stands tall and excited with his partnership with Schoolcraft College to cultivate young minds trained in the art of brewing on Sept. 2.

Weinkauf interviewed 18 breweries and distilleries between January and April 2015 through the thorough and detailed DACUM (Developing a Curriculum) process, which is the leading online resource for occupational analysis. This process takes one to two days to assess what workers do for tasks, duties, skills and traits. This information is collected, and then is presented in a graphic chart according to dacum.org.

“The point I took away from those interviews was they don’t need degrees. What they really wanted was someone who could come in and hit the ground running and knew all of the background knowledge— the science—and how to work on all this equipment,” said Weinkauf.

The 24-credit certificate program will help students learn the science of beer, brewhouse and marketing operations, and packaging, among other skills. Adding other skills rather than just brewing was important to Weinkauf, who spoke to brewery owners to determine their needs before determining the program’s components.

The program is limited to 24 students in the fall, though Weinkauf hopes to double that by next year. Registration is currently open, and classes begin Aug. 31.

More news on the facility and program:
The Schoolcraft Connection