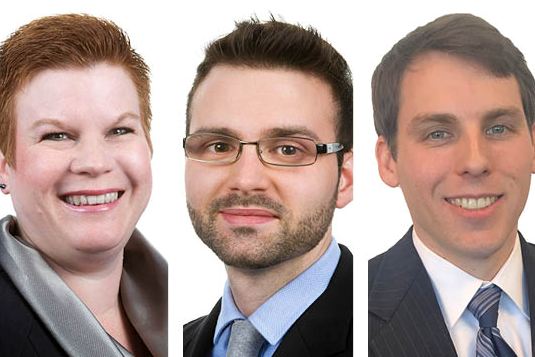 IDS is pleased to announce (from left to right) the promotion of Tracie Withrow, Adrian LaTona, and Justin Kiriazis effective, January 1, 2018. We recognize and appreciate the wealth of initiative they present in their perspective roles, and the contributions each of these individuals have to the progression of Integrated Design Solutions as a firm. Congratulations! Promotions include :

Since arriving at IDS in October 2010, Adrian has been a part of a number of projects of varying scale. Working closely with Michigan State University coaches Izzo and Dantonio, he was a member of the team that delivered the Spartan Stadium North End Zone Addition, Duffy Daugherty Renovations and Berkowitz Office Refresh. He has also lent his talents to such University of Michigan projects as the Munger Graduate Residences, East Quad Renovation and the Taubman addition to the University of Michigan Art and Architecture building. He looks forward to growing as an architect as he continues to explore.

Justin has been with Integrated Design Solutions since June 2016, and has since been involved in projects with substantial clients including Ford Motor Company and Horizon Global. Justin is committed to upholding the positive reputation of IDS as he strives to generate creative design solutions that fit within the client’s needs and budget.   Outside of work, Justin enjoys spending time with his wife Renee, biking in the summer and skiing in the winter.  They are avid fans of Michigan football and Detroit sports and try to attend as many games as possible.